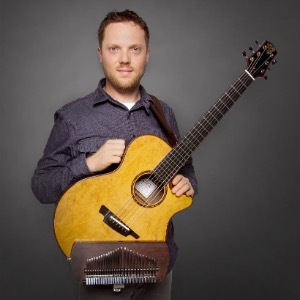 Rated one of the top 30 guitarists in the world under 30 years of age by Acoustic Guitar magazine, Trevor is an instrumentalist from Philadelphia USA whose style ranges from edgy driving rhythms to delicate melodic themes. Exploring the guitar’s full creative potential, his blending of sounds weave together textures into grand yet intimate and lyrical compositions. While leaving no physical aspect of the guitar untouched, Trevor navigates audiences through an igniting experience of music that isn’t just heard but felt. Aside from being featured on NPR, NBC, PBS and countless international media outlets, Trevor’s tour calendar has taken him to 14 countries and counting performing at many historic places including Carnegie Hall in NYC, Union Chapel in London, Music History Museum in Bologna, Adolfo Mejia Theater in Colombia, and more. He has also had the opportunity to share the stage with some of the most trusted and legendary names in the music business prompting high praise from John Mayer, Steve Miller, Graham Nash, Steve Hackett, Dar Williams, Will Ackerman, Pat Martino, Stanley Jordan, Phil Keaggy, Tommy Emmanuel, Andy McKee and more.


"...Beautiful work! It is so refreshing to hear a player take a whole new approach to the instrument..." - John Mayer (Grammy Winning Solo Artist)

"...In the genre of intriguing guitar players Trevor really stands out. His music is both soothing and challenging..."
Graham Nash (Crosby, Stills, and Nash)

"...Creative imagination resides, as well as flourishes within certain artists, and it certainly does so in Trevor Gordon Hall. Ingenuity is something that always causes surprise, and this gentleman's abilities are totally exceptional..."
Pat Martino (Jazz Guitarist)

“…a guitarist of substance. He can impress with the best of them, but he can beguile and reach you emotionally in a way which is supremely rare…stunning range stylistically while made cohesive by the power of Trevor’s artistic voice and vision..."
Will Ackerman (Artist and Founder Windham Hill Records)

Trevor Gordon Hall has been added as an artist you support!