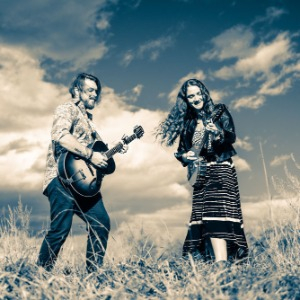 They dwelled in the Shire-like mountain town of Brattleboro, Vermont.
On September 15th, 2013, Jahnavi and Addison embarked on a cross
country bicycle trip, and rode from VT to Austin, TX with a bunch of
instruments and their dog, Zoso (they had a lot of food too, but they ate it).

After 4 grueling, heart-and-mind-expanding months of pedaling and
connecting with strangers, The Love Sprockets arrived in Austin Texas.
The Capital.

After a year of playing music with Aaron Watson (upright bass) and Pete
Van Dyke (drums and vocals) The Love Sprockets hit the studio in January
2015 with their wily sound engineer, Captain Red Beard, and recorded their
first full-blown, no-holds-barred, unadulterated, panty-dropping album, Nobody Wants To Die...

Than, unexpectedly, Watson (the bass player) decided to move to Mexico
to brew beer in Playa del Carmen, and Jahnavi decided to get on her
bicycle to cycle across Mexico starting in Austin.

After an almost 4 month journey and over 2,000 miles of pedaling, Jahnavi
returned to Austin and Addison to continue performing as a duet.

The Love Sprockets recently moved to Fort Collins, Colorado, where they
are currently converting a 1991 Bluebird school bus into their gypsy home
and tour bus!

Become a fan!
Get notified when The Love Sprockets play locally and help support their career. Join the Undiscovered Music community now to become a fan and support your favorite artists!

The Love Sprockets has been added as an artist you support!