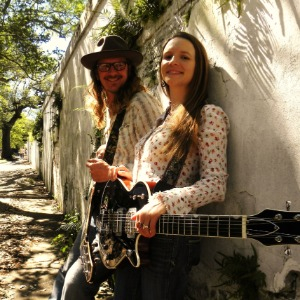 Based in New Orleans, The Dirty Rain Revelers embodies the unified musical collaboration of husband/wife team, Matthew and Melissa DeOrazio, both on guitars and vocals.
The couple met on a gig in Austin in October 2005, a post-Katrina love story set to music. Melissa has family roots in TX and grew up in Austin; Matthew was retreating and recovering from the aftermath of Hurricane Katrina.
To date, they’ve recorded four albums, performed at various festivals, toured annually from the Southwest/East Coast/Midwest/Northwest, built a home recording studio, established their own music publishing company, and performed their own arrangement of the Cole Porter tune, I’ve Got My Eyes on You in the closing scene of NCIS Crescent City Part 1 with Mark Harmon and Scott Bakula.
Their song, I've Seen, was featured on NCIS New Orleans (October 11, 2016), where Matthew performed the song instrumentally on the show, with local trumpet player Ian Smith.
They appeared for a third time on NCIS: New Orleans (May 15, 2018) as a full band, performing two original songs. (I've Seen and Pick Out Your Own Cloud; both songs are on the Spark album, released October 25th, 2018.

Melissa and Matthew are regular volunteers and members at the local community-based/supported radio station, WWOZ, believing in being a part of the grassroots process of supporting music that they and their peers make in Louisiana.
They also have their own radio show on local community-based/supported radio station WHIV, (stands for We Honor Independent Voices). Their show, Surya Revelers Medicine Music, airs Wednesday nights, 10pm-midnight CST. Stream online at whivfm.org

Become a fan!
Get notified when The Dirty Rain Revelers play locally and help support their career. Join the Undiscovered Music community now to become a fan and support your favorite artists!

The Dirty Rain Revelers has been added as an artist you support!