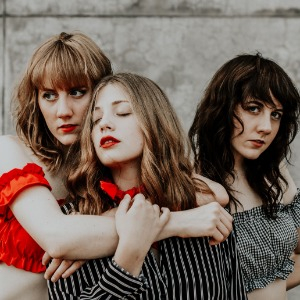 Annie Oakley is a folk band fronted by twin sisters Joanna (Jo) and Sophia Babb, paired with the violin of Nia Personette. We're keen on telling stories, finding the sweetest harmonies, and playing shows where we meet the listeners we're playing for.

We started writing songs after the death of our father in 2011. Our family was broken and so were we – the only thing we could do to get through it was write songs.

Nia lost her dad just a year before we lost ours, so through this mutually-shared grief, we were made closer than friends. We became three sisters instead of two.

During this period of recovery and self-discovery at the height of adolescence, we ventured from our bedrooms where our songs were written to live audiences with keen listeners. We moved on to bigger stages and places, and soon, we were on the road touring. We had no idea that storytelling from the most basic, human level, would bring us to where we are now. We wouldn't change a thing.

Now we’re graduating from college, starting our own lives and stories, and making a path that isn't followed by the grief that first brought us to music. Folk music has now become our spark for joy.

The recent release of our first full-length album, Words We Mean, chronicles our transition from youth to young womanhood, from grief to happiness, narrating the first chapter of our story.

So what's next for The Annie Oakley?

Find out by following us on social media or by subscribing to our newsletter.

Here's what other people say about us:

"A warm cascading sound, allied to thoughtful emotive lyrics, Words We Mean has set a high benchmark for Annie Oakley, and I await this band’s growth with anticipation."
Folk and Tumble

"Folk-Americana language that eludes most others at their tender age [ . . . ] their pristine but pillow-soft voices folding into immaculate harmonies the envy of even the most vetted musical collaborators out there.” Joshua Boydston, The Norman Transcript

“These sisters harmonize like fresh made bread and home churned butter, sweetened with just a touch of molasses. I hear strains of Mindy Smith here, and the comparisons could go on. But why make comparisons when you can just listen to them? To see and hear such magic when it first comes to bloom, to watch it grow and spread smiles and wonder across a wider world is indeed a privilege and pleasure. Don't miss them when they come to your area!”
Rick Reiley, Corridor Magazine

Become a fan!
Get notified when The Annie Oakley plays locally and help support their career. Join the Undiscovered Music community now to become a fan and support your favorite artists!

The Annie Oakley has been added as an artist you support!