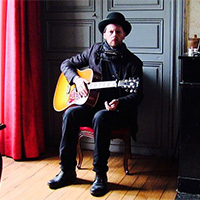 Bubblegum Slut/ UK: « A paradoxical mix of a Yorkshire man’s Northern bluntness that tells it like it is and a “continental poetic tongue which educates and stirs…! » -

Stylusmag/ Canada: « Berry has a keen intellect, a disdain for those buffered from reality, and an internalized anger that fuels the vitriol in every adjective. It is real life undecorated, and smoulders like the everyday pressures. Clean glass please, and leave the bottle! »

With the aid of an acoustic guitar or piano he sits centre-stage and recounts with his powerful seducing voice the tales of his life on the back streets of Leeds/England, Paris/France, Berlin/Germany, his touring years through to his crippling road accident in Brighton/ England.

In the 80s he was the guitarist & founding member to the successful Rock/Goth band, The Rose of Avalanche, which produced many great albums and singles. eventually enough was enough and he broke up the band in the 90s and embarked on a solo career under his own name. he played in every possible venue in the UK and Europe.

3 solo albums later (PJB, Ginnel and Nations) which saw him support giants of the songwriting genre such as Frank Black, Vic Chestnutt, Kevin Coyne, David Bowie, Howe Gelb, Townes Van Zandt, he is now back.?
After rehabilitating from his accident, he has a new album ‘Spitfire Jukebox 1’. It’s mainly one instrument and voice that give a beautiful raw insight to the human soul. It reveals a personal account of the last few years.  touches on a cathartic necessity to get through the nightmare of his road accident to the celebration of life itself.

Recorded in Berlin, Germany in the vast hall of the famous UFO-Studios, an old brewery which doubled-up as a bunker in the second world war.

«when I arrived at the studio in Berlin, there was this colossal old hall that just had ‘something’ that moved me.  So, I said to the man, get me a chair, put it in the middle of the hall and record me bleeding….»  ?
«the whole point of this album was to be in control and do everything myself - for good or bad - where there is no machine behind me, there’s no deadlines, no rules and no bull shit!

Just me and my demons». Paul James Berry

Become a fan!
Get notified when Paul James Berry plays locally and help support his career. Join the Undiscovered Music community now to become a fan and support your favorite artists!

Paul James Berry has been added as an artist you support!