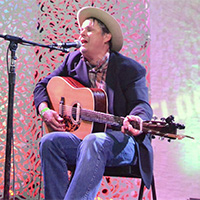 Olds Sleeper is the stage name for the songwriter and multi-instrumentalist Heath Hardin. Raised in southern York County, PA, his music and lyrical material draws heavily from the rural Pennsylvania landscape and the gritty attitudes of its inhabitants. Heath inherited his love of country music and banjo playing from his grandfather. While not fitting neatly into any musical category, his music is steeped in Delta blues, Americana, old country, and folk. Olds has been featured in No Depression, on WITF Harrisburg as an artist of the month, and his 2012 album, New Year’s Poem, was chosen as a Saving Country Music’s album of the year nominee. He lives in beautiful Lancaster, PA with his wife and three children.

"I get the impression that Olds Sleeper’s kind of truth is the truth of experience; the physically apprehended truth of the body; the truth of sincerity, rather than the truth of argument. ..... I have rarely heard music that so economically and powerfully enacts a view of the world, and though it is a bleak one, it is not an unrealistic one, and it is not without its compensations. I’m raising a toast to the man who made these songs, although unlike one of his characters, I won’t be drinking it from shotgun shells."- Oliver Arditi, OliverArditi.com - New Years Poem, review

"Not the type of artist that will be making an appearance on the next Gossip Girl, but that is just another reason to dig your teeth into it. It’s dirty, got guts, dusty jeans and includes a heart of gold on the inside "
-SLowcoustic music-


"It is said the systemically-morose life the modern American male leads is one of quiet desperation. Olds gives that quiet desperation a voice, ...Towns and women, and unresolvable circumstances and sins paint a bitingly authentic picture of a man at wit’s end. It is a soundtrack for the American anti-hero, making you fall in love with the villain, cheer on bad male middle-aged behavior, and see the beauty in otherwise ugly things. . . . . and then Olds plays a bad ass banjo instrumental"-- Saving Country Music


"Multi-instrumentalist and vocalist Olds Sleeper has worked long and hard over the years to cultivate a most unusual soundscape of experimental and rustic folk, old soul Americana, and lo-fi minimalist roots."- James Carlson, nodepresssion.com and Indie Examiner

Become a fan!
Get notified when Olds Sleeper plays locally and help support their career. Join the Undiscovered Music community now to become a fan and support your favorite artists!

Olds Sleeper has been added as an artist you support!