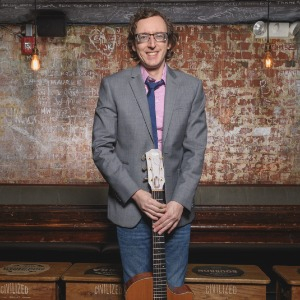 In June of 2019, Harrison High School closed, and a pink slip was delivered to my mailbox.

Other than my residency at mash, I played very little guitar during the summer. I was lost in the heat of anxiety, unemployment forms, job searches, resume revisions. I interviewed in five districts by late July, and I was solo parenting while my wife worked. No songs were written; I began to freak out in mid-August when no job offers came either.

The sun sets, the sun rises: Two weeks before the school year started, I had an interview in New Boston! And now, I write this update as the colors of the trees change to red, yellow, gold, and brown. I’m so happy Huron hired me!

During the summer, Mike Gentry warned me how time works for parents; once you give up a slice of hours, it’s really hard to get those hours back. I’ve learned this lesson the hard way. Now that life is settling into a routine again, I’m trying to make time for music again.

My kids are two and four; the anxiety of unemployment has faded into a frantic sprint of lesson planning and essay reading. Still, I’m strategizing how to musically approach 2020.

This strategy starts by scheduling more time to play guitar, mandolin, piano. Today, once I got Ginny and Alton to sleep, I rehearsed a few songs I might record during winter break, and wonderfully the riffs and chords of a possible new song appeared in the key of E.

Then, my four-year-old daughter interrupted my demo recording to ask, “What are you playing, Dada?”

She paused and stared at my Taylor acoustic. “Your guitar sounded so beautiful, I had to come hear it close up.”

It’s hard to argue with a four-year-old at 9 PM. It’s also hard to force Muse to send song ideas when there are 57 essays about Greek mythology awaiting feedback.

Earlier today, my kids and I had music time after Al’s nap. Ginny wrote a song titled, “You Are the Colors That You Love.” (Isn’t that a beautiful title from a four-year-old? I hope it’s OK if I borrow it.)

Then, Alton played guitar for the first time. He used my mini-Strat tuned to open-G. Both of his hands plucked the stings, as if the guitar was a piano. He smiled at me, turning the tone knobs and tuners. He started singing a song of his own, some words we could decipher, like “car” and “sunshine,” others in gibberish.

We all got a little writing time in today.

Hopefully by 2020, I’ll have some new music to share with you, too. For now, it’s just this image of my family chasing a song.

Become a fan!
Get notified when Mike Vial plays locally and help support his career. Join the Undiscovered Music community now to become a fan and support all your favorite artists - it's free to join!