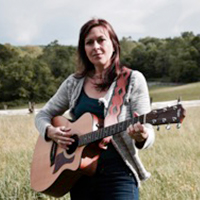 Her CD More to Life, is her fourth LP release. She also has many single releases including two singles released by Black Toast Records.

She gives back to the community by mentoring musicians, holding workshops
& teaching courses on how to build a business in Music Licensing. She also holds
Workshops for women to help them face fears, find their self worth, passions and achieve their dreams.

She performs at venues such as Bethesda Blues and Jazz Club, Signature Theatre, and in  Concert series such as Focus Music  and Stone Room Concerts,Festivals at Main Street Music Fest, First Saturdays, Wineries, festivals,  private events and more.

Become a fan!
Get notified when Michelle Lockey plays locally and help support her career. Join the Undiscovered Music community now to become a fan and support your favorite artists!

Michelle Lockey has been added as an artist you support!