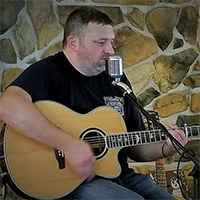 Michael McKenzie is a solo singer songwriter bridging the gap between the old country music sound and the more modern country sound. Times are changing with the sound of music and Michael is trying to push his way through the music sound and find a foot hold for his sound. The road has not been easy for Michael, trying to make his way through the country music industry and to get his music heard.

Michael’s music roots run deep from classical, rock n roll, blues, southern gospel, and country music. Even as a young boy, Michael was listening to mainly country music but branched out to AC/DC, Guns N Roses, Def Leppard and many more. With the great memories of sitting on the porch with his father, listening to the likes of Merle Haggard, Jerry Reed, Willie Nelson, Alabama, the Oak Ridge Boys, George Jones, and others heard on the Grand Ole Opry. Michael's love of country music is strong and lasting. Even with the influences of more modern artists such as Eric Church, Brantley Gilbert, Jason Aldean to name a few, Michael holds all of his country influences close to heart. Michael has turned those many memories and experiences into songs of introspection, reflection, and analysis. As he looks back on his past military service, the meeting of the love of his life (Debra, who helped him to bring about their son, Michael McKenzie III), and the impacting memories of his upbringing in Tallahassee Florida, Michael combines it all into something that for him is much more than just a song, and is instead a soulful expression.

Michael enjoys meeting and talking with his audience members, and the conversations he has with them only adds more value to his songwriting experiences.

Become a fan!
Get notified when Michael McKenzie plays locally and help support their career. Join the Undiscovered Music community now to become a fan and support your favorite artists!

Michael McKenzie has been added as an artist you support!