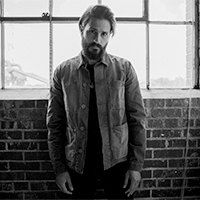 "I've always done things a little bit differently," says singer/songwriter Michael McArthur, who wrote the most vibrant album of his career, Ever Green, Ever Rain, during the darkest season of his life.

Songwriting has always been a form of therapy for McArthur. Over the past decade, the Florida native has filled a handful of EPs with his own mix of raw soul and lushly layered folk, working with producers like David Bianco (Tom Petty, Lucinda Williams) and Greg Wells (Adele, One Republic) along the way. He makes his full-length debut with 2019's Ever Green, Ever Rain, an album that's by turns warm, woozy and wistful. The album shows the full range not only of McArthur's voice — a gorgeous instrument that soars and swoons, flecked with vibrato and palpable emotion — but his songwriting, too, bouncing from the soft acoustics of "Elaine" to the percussive pulse of "Save Me From the Fire." Recorded with Grammy-winning producer Ryan Freeland and inspired by McArthur's long period of isolation and self-repair, Ever Green, Ever Rain is both earthy and anthemic — the sound of a songwriter who's unafraid to shine a light on his own faults.

"It's really green here in Lakeland," he says of his Florida hometown, where Ever Green, Ever Rain was composed. "I'll sit on the porch during the summertime and watch the daily thunderstorms, and that's how I came up with the name of the album. I was drawn to the idea that sometimes, the destroying of one thing is the creation of a new thing. You can't have the green without the rain. I don't look at it as 'You have to have the hard times so you can appreciate the good times.' I look at it as, 'You have to have them both.' Because that's life."

A decade before Ever Green, Ever Rain's release, McArthur sold his share of the family-owned bistro he'd launched with his brother at 21 years old. Music had always been his true calling, ever since he began listening to records by James Taylor, Stevie Wonder and Michael Jackson in his childhood home. Free to pursue a career outside of the restaurant business, he began performing his original songs, quickly graduating from regional gigs in Florida to a string of cross-country tours. He opened for the Beach Boys, won Florida's 2013 Grammy Showcase and earned praise from outlets like Huffington Post, who promised, "Michael McArthur's voice will make you wish he was singing about you."

Often, he'd perform alone, accompanied only by an acoustic guitar. Other times, he'd team up with an ensemble as large as the Imperial Symphony Orchestra, whose rich, robust sound accompanied him during a one-off performance in his hometown of Lakeland in 2016. Then, after eight years of creativity and consistent shows, he slammed on the brakes.

McArthur was tired. He was introspective. Most importantly, he was in danger of losing the woman who'd been his partner and muse for years. Taking a break from the road allowed him to rebuild both his marriage and himself. It also sparked the musician's most creative period to date, with McArthur channeling his own self-reflection into 50 new songs.

"I'm generally a private person," he explains. "I don't like to divulge what I'm going through to my friends. That's what music is for. It's my medicine. My therapy. It's like a mother's hand."

After filling up a three-ring binder with song ideas, McArthur turned to producer Ryan Freeland, whose work included Ray Lamontagne's atmospheric, award-winning God Willin' and the Creek Don't Rise and Bonnie Raitt's Americana hit Slipstream. Working together, the pair recorded Ever Green, Ever Rain at United Recording Studios in Los Angeles. There, in the same room where Frank Sinatra and Elvis Presley once recorded their own hits, McArthur sang his new songs alongside a live band, capturing 13 tracks in just four days.

"There was so much love in the room, and you can hear that on the recordings," he says, crediting his ace studio band — whose members included Dawes keyboardist Lee Pardini, Grammy winner Paul Bryan and A-list drummer Steven Nistor — with encouraging a familial vibe throughout the recording process.

In keeping with McArthur's entrepreneurial spirit, Ever Green, Ever Rain will double as the first release on the songwriter's own label. "I needed to find a way to make what I do sustainable, but also perpetual," he explains, adding that the label has already secured funding for a follow-up release. Running a business is familiar to McArthur, whose old restaurant remains a thriving fixture of downtown Lakeland, yet much has changed since the day he hung up his apron and hit the road as a solo artist. He's taken punches and delivered blows of his own. He's learned, listened, lost and loved. Ever Green, Ever Rain captures that sense of balance, focusing on themes of acceptance and understanding.

"I like how the album starts with 'We Live & We Die,' which is a very dark song, but then ends with 'Ever Green, Ever Rain,' which is a very positive song," he adds. "They both convey a very similar message from different perspectives. "We Live & We Die" is seen from the perspective of someone who's just starting to go through some challenges, while 'Ever Green, Ever Rain' is about the process of looking back upon everything and saying, 'This was all necessary. And I'm ok.'"

Become a fan!
Get notified when Michael McArthur plays locally and help support their career. Join the Undiscovered Music community now to become a fan and support your favorite artists!

Michael McArthur has been added as an artist you support!