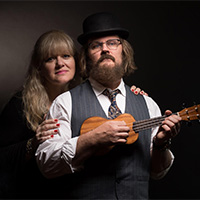 The Indie Music Channel’s Americana Artist of the Year 2018, Lost Hollow is dynamic band comprised of two singers, Tommy and Lorrie Harden. Tommy has been a Nashville ‘A’ team studio musician for years.  During his stint in Nashville, he as played on an estimated 7-10,000 recording sessions.  Tommy has played on sessions for Taylor Swift, Alan Jackson, Craig Campbell, Kip Moore, Reba McEntire, David Allen Coe, Waylon Jennings, Lo Cash Cowboys, Tamia, Candi Staton, Big and Rich, John Anderson, George Jones, Jessica Simpson, and countless others.  He has played on number 1 songs including “I Drive Your Truck” (ACM and CMA song of the year), “Girl I Just Got Started Loving You’ (most played song of the year), ‘Lost In This Moment’ (Big and Rich’s only #1 hit), and many, many others.

Tommy has played at the White House, on Good Morning America,  the Today Show, the View, The Ellen Show, Oprah, Regis and Kelly, the Tonight Show, the David Letterman show, and has also has a screen credited appearance in the movie Muscle Shoals.

As Nashville based songwriters, Tommy and Lorrie got not 1, but 2 cuts on Reba McEntire’s double platinum selling album ‘Duets’.  They included a song with Reba and Faith Hill called ‘Sleeping with a Telephone’ and another with Reba and Carole King called ‘Everyday People’, which was also performed live at the Kennedy center with Reba and Carole in front of the President and the entire nation via NBC.  (As far as we know, we’re the only outside writers to ever get a Carole King cut that she didn’t write).

Lost Hollow has appeared on the Bob Harris ‘Under the Apple Tree’ sessions and has toured England, Wales, and Ireland on many trips to the Uk as well as appearing on the BBC via many different radio shows.

Become a fan!
Get notified when Lost Hollow plays locally and help support their career. Join the Undiscovered Music community now to become a fan and support your favorite artists!

Lost Hollow has been added as an artist you support!