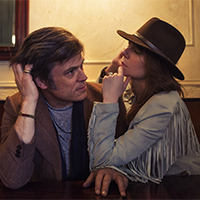 Lady & West is a musical duo that puts a lot of emphasis on the ‘&’ – on the alchemy they discovered in working, living, writing and playing together.

“Lady” refers to the melodic, more refined side of life, while “West” is the rough and muddy, below-the-horizon half of things. What happens when these yin and yang opposites come together is what they find inspiring, and where they found their sound.

The band’s influences range from American Folk, Blues and Art Song, to the likes of Jack Kerouac, Whitman and Thoreau, Neil Young, Mississippi John Hurt, Michael Hurley, Bert Jansch, Paul and Linda McCartney. As with many artists, the list is endless.

Singing and writing for all the ancient reasons, their music been called ‘evocative, transportive, hypnotic, and pure’.

Originally from Texas and Kansas — yet starting the band in Brooklyn — the duo is excited to return home to Austin, Texas where their debut album, ‘Bright Soul’ was recorded and produced by Matt Noveskey.

Their full-length release is filled with melodic groove and country blues that combine together “in the birthing of something totally new”. Although the album is the first studio effort for Lady & West, the band has received rave reviews from the likes of the Music Editor at Greenpointers.com, and has been featured as “New and Notable” and one of the top downloaded bands on Noisetrade.com. Bright Soul has been aired on national and global TV, radio and internet stations and blog sites around the world. It’s been featured in the Hear Texas Here section of Waterloo Records and enjoys a place on the much-revered Texas Music wall.

“We couldn’t be more appreciative of the music culture in Austin, a big reason why we now call this town home,” says the duo. “The talent, the energy, the history, even the folklore — it’s all unparalleled. And so we want to contribute all we can in a meaningful way. Not just in playing, but in actively serving the community. We are all a part of this rare and precious thing and want to keep it alive and throbbing.”

The duo has performed in several different venues in NYC, The Hudson Valley and The Catskills. They are currently booking gigs in the Live Music Capital of the World.

“These songs speak of love and of loss, of our deepest fears and our highest aspirations. They bridge the gaps between our ‘spaces and places’, giving meaning to our lives, telling us the old truths: let go, and become who you once were, and shall be again…”

“Lady & West’s story and their music are what OPEN loves most – beauty in the small things, honesty, and a sincere desire to connect through art and storytelling.”

“You can’t help feeling like you are right there in the room as Jennifer sings and Kirk picks and strums. It doesn’t sound labored upon, its sounds effortless.”

Become a fan!
Get notified when Lady & West plays locally and help support their career. Join the Undiscovered Music community now to become a fan and support your favorite artists!

Lady & West has been added as an artist you support!