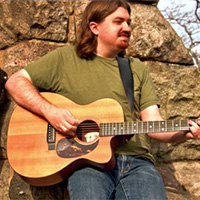 It’s always been about the music for Kyle Hancharick, a singer/songwriter from Warwick, New York. His passionate performances are punctuated by a crisp acoustic guitar and soaring tenor vocals. This is best shown in his 2018 EP “Breathe,” a four song project consisting only of acoustic guitar, bass and vocals. And that’s all that’s needed for this artist whose roots are planted in contemporary folk music.

His journey as a musician began at the age of 2 when he asked for a “real guitar.” He could play guitar, piano, harmonica and drums by the time he was 6.

Kyle’s earliest influences were from the songs of John Denver and Bob Dylan. When he was 8, Kyle played out for the first time. It was at a Bob Dylan Festival at a local winery. With his 3/4-size guitar slung around his small torso and a harmonica holder around his neck, he took to the stage with about 100 people gathered. No one expected what they would hear. This sweet, shy little boy blew them away with his version of “Blowin’ in the Wind.” He gave the most memorable performance of the day.

As he grew up, Kyle’s influences diversified. He discovered Richard Shindell, David Wilcox and Ellis Paul, master storytellers who would have tremendous impacts on his work. He identified with the working class anthems of Bruce Springsteen. He reveres their musicianship, their poetry, and their stories.

Throughout all of this, Kyle has grown musically and personally. Kyle has lived his life with Asperger’s Syndrome, a high-functioning form of autism marked by difficulties in social interactions, some motor skill deficiencies, and a pointed interest in a particular subject. In Kyle’s case, that interest is music.

Recently, Kyle has begun to make a name for himself in the folk music circle. He has performed on the Emerging Artists Showcase at the 2018 Falcon Ridge Folk Festival, and he has opened shows for the likes of Ellis Paul, Lucy Kaplansky, and Red Molly.

Kyle takes in the world, processes it and turns it into song with his own special touch. He has a unique take on things, a view of the world others may not necessarily notice. He continues to grow as an artist, sharing his story and messages of love and peace.

Above all, though, it’s still about the music.