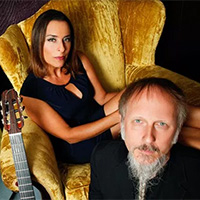 STORY:
Jenna & Rolf first met in NYC at the very end of 1995 in a rehearsal for a rock orchestra called “Illuminati”.  It was an 18 piece ensemble that was focussed on the music of the Grateful Dead. The band toured the United States and Canada, recording and touring with many special guests, including Jorma Kaukonen (Jefferson Airplane), Tom Constanten (Grateful Dead), Ike Willis (Frank Zappa) and Buddy Cage. Jenna & Rolf performed together for 3 years in Illuminati and appeared together on 3 of the band’s recordings.

During this time period, Jenna & Rolf talked about putting a duo together.... “someday”. But after the three years, Jenna returned to the Bay area (CA) and Rolf stayed in the NY area where they both enjoyed independent, successful careers. Then in January of 2014, Jenna came to NYC for a music conference and the two had tea to catch up on what they’d each been up to over the years.  They decided that “someday” had arrived.

In June 2014, they played their first gig together in 16 years and recorded twelve tunes in a day and a half, laying plans for making the duo a permanent ensemble. Their music is a combination of originals, older pop tunes, and jazz standards. Since their debut release entitled “Spark” (Spring 2015), Jenna & Rolf have been touring/performing almost every month. Jenna & Rolf have since released their second recording entitled, “Begin to Dance”. Audiences throughout the US, Europe and Mexico all agree that this is a very special pairing.

"Acoustic guitar fans have to raise him to the pantheon of the greats."
-  Midwest Record

"It’s been a long time since I’ve come across a CD that compelled me to listen to every song from top to bottom, and left me wanting for more.
The song selections and performances truly reflect the incredible chemistry between Jenna and Rolf. Needless to say, I absolutely love their CD!!! Go Jenna & Rolf!!"    - Larry Batiste (Music Director for the Grammys)


ABOUT:
Jenna Mammina has been recognized as one of the leading women of jazz/pop crossover for three years in a row by Jazziz Magazine. She has earned numerous awards, including Jazz Performer of the Year for the SF Weekly, a nomination by California Music Awards for Best Jazz Album for her sophomore CD, “Meant to Be”, and the Goldy Award for her work with children through her nationally acclaimed program Scat for Cats. Jenna’s first album, “Under the Influence”, earned a four-star review in Japan’s most prestigious jazz magazine, Swing Journal. She has performed with artists such as Bobby McFerrin, June Millington, Rickie Lee Jones, Al Jarreau, Phish, David Sanborn, Ray Obiedo, Wil Ackerman, Liz Story, Tuck Andress, and Rosemary Clooney. Jenna has graced the stages of esteemed venues like Yoshi’s in Oakland, California, Town Hall in New York, The Green Mill in Chicago, and festivals such as Jazz Aspen, New Orleans Jazz and Heritage, Monterey San Francisco, Big Sur and Mount Hood.

Rolf’s guitar playing has earned the praise of Joe Pass, Jim Hall, John Abercrombie, and Bill Frisell. He appears on over 60 CDs, having performed with or been on recordings with Tony Trischka, Loudon Wainwright, Anthony Braxton, David Johansen, John Medeski, Billy Martin, Glen Velez, Archie Shepp, Maggie Roche, Jorma Kaukonen, Roswell Rudd, Dave Douglas, Ike Willis, Eddy Arnold, Michael Doucet, and Tom Contanten (Grateful Dead). Rolf has toured the United States, Germany, France, Italy, Belgium, Sweden, Austria, Hungary, Switzerland, the Netherlands, Canada, and the UK, performing at dozens of jazz, jam band/rock, folk, and blues festivals (including the JVC Jazz Festival, the Boston Folk Festival, the Syracuse Jazz Festival, Ripplefest, Music On The Mountain Festival, the World Expo 2000 in Hanover, Germany, and the Toronto Jazz Festival). He has performed at Lincoln Center and Town Hall in NYC, and at the Kennedy Center in Washington, DC. He has appeared on soundtracks for both film and television and his music has been featured on National Public Radio’s All Songs Considered. His solo guitar recording, "Balance", was awarded 4 stars in DownBeat magazine.

Become a fan!
Get notified when Jenna Mammina & Rolf Sturm plays locally and help support their career. Join the Undiscovered Music community now to become a fan and support your favorite artists!

Jenna Mammina & Rolf Sturm has been added as an artist you support!