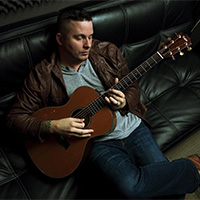 James Lee Baker is a songwriter, multi-instrumentalist and producer. His songs are crafted from exposure to many genres of music throughout the course of his life. Raised in a musical family, he began some form of music education at an early age, attending music camps in the summer and competing in vocal competitions throughout middle and high school.

James has played at several prominent venues including the Whiskey A Go Go in Los Angeles, The Fox Theater in Boulder, and Swallow Hill and The Walnut Room in Denver.

“Songs with clear intention, fingers with six-string skills, a voice that lifts the heavens, this man can give you chills.”

"Baker's phrasing paired with the sparse arrangements captivate the listener. The title track -- Baker's homage to the purifying qualities of nature -- is a delight."

"Baker's song's pay attention to the oft-unnoticed details that make up a story. Well written songs with tight yet spare arrangements and vocals, this is someone going places."

Become a fan!
Get notified when James Lee Baker plays locally and help support his career. Join the Undiscovered Music community now to become a fan and support your favorite artists!

James Lee Baker has been added as an artist you support!