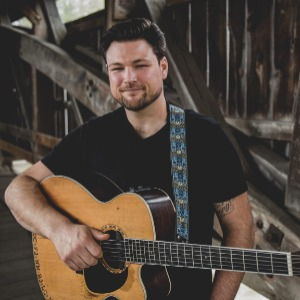 Best of the Hudson Valley’s 2019 Best Vocalist/Best Artist and SongwriterUniverse’s Best Song of the Month Winner, Ian Flanigan “inspires a nostalgic sentiment akin to wistful escapism… emotional without being weepy, vulnerable without being pitiful, and conceptual while still remaining relatable” (Gallagher, SUNY editorial). Flanigan's sound—an eclectic blend of progressive folk-pop and percussive fingerstyle—is reminiscent of the road less traveled, paved with poignant lyrical truths of his past.

“Imagine Tom Waits as a member of Mumford & Sons playing songs by the Lumineers, with a hint of Chris Stapleton. That’s my impression of Flanigan, whose smoky barroom voice provides contrast to the melodic plea he unleashes with an urgency. Overall, Flanigan offers the kind of optimism that is hard-won after losing on the kind of bets that alter the trajectory of a life—bets you make on yourself, bets you make on others, bets that fail to deliver more often than they come through” (John Barry, Poughkeepsie Journal).

Ian’s arrangements and compositions have been described as “rhythmic, engaging, compelling and very creative” (Bob's Music Box), while his voice has been praised time and time again as having a “great depth and richness“ (Podcart), as well as “unique and powerful” (Argentina TOP/VIRAL HITS) with a “smoky Waits vibe... leaning towards pop folk” (Austin Town Hall).

His most recent release, “Give Me Color” received accolades both internationally and regionally, marking the success of a milestone collaboration with three-time Grammy winner and Hudson Valley local, Justin Guip (producer, engineer, percussionist). Praise for the EP’s title track: “Quite honestly, I can’t remember when an acoustic guitar took my breath away, and it’s safe to say that has never happened within the first 10 seconds of hitting play on a track before. The distinctive choppy chords broke into vibrant finger strumming mesmerism which introduced Ian Flanigan’s reverberant whisky-soaked vocals in their upcoming single ‘Give Me Color.’ The nostalgic tonality of the track offers plenty of aural escapism while the lyrics set up sweet semantics which doesn’t resonate as saccharine due to the sheer authenticity that they were penned with. Any fans of Chris Cornell and Eddie Vedder definitely won’t want to let Ian Flanigan’s talent, passion, and propensity to weave aural alchemy on a fretboard pass them by” (Amelia Vandergast of A&R Factory).

Past House Concert Praise:
"We recently hosted our first house concert. We were fortunate enough to have Ian Flanigan perform. The audience was captivated by his amazing voice and unbelievable talent. It was a very enchanting evening and our home is still resonating with the sounds of his beautiful music. Ayla was super easy to coordinate with and ensured that every detail was discussed prior to the event. We highly recommend Ian and Ayla from Nightcap Entertainment." -Miriam Adams, Renwick BnB

"How can we thank you enough for bringing an evening of lyric joy to Phantom Theater? Such an epic endeavor: weary miles, sweaty brows, split fingers. . . all shared with grace and humor. No small feat, in this, or any time. The timbre of Ian's voice and the subtlety of his guitar playing are so much more evident in live performance. In an era in which we have all grown accustomed to the carefully curated personae of Instagram and facebook, it is revelation to see/hear an artist present an honest and open glimpse of his interior life and artistic process. Thanks to you for finding Phantom and for taking a chance on our community here in the Mad River Valley. We hope you have a safe journey home, and look forward to future performances, wherever they may be!" -Julia Purinton, Medusa Studio

"Being a fan of his music, I hired Ian for a surprise Birthday party recently. What a great choice of entertainment! Not only was his music fantastic, but he proved to be a gracious performer as well, interacting with guests and taking the time to be a part of pictures, etc. He made every effort to ensure the evening was special for everyone in attendance. It was a genuine pleasure to work with Ian and his booking agent, Ayla. Communication leading up to and including the day of the event was clear and concise and I felt completely confident that I was dealing with experienced professionals. I'm looking forward to working with both of them again, in the near future! If you are considering hiring Ian, I would not hesitate. He will not disappoint!" -Jeff Smith, Saugerties, NY

Become a fan!
Get notified when Ian Flanigan plays locally and help support his career. Join the Undiscovered Music community now to become a fan and support your favorite artists!

Ian Flanigan has been added as an artist you support!