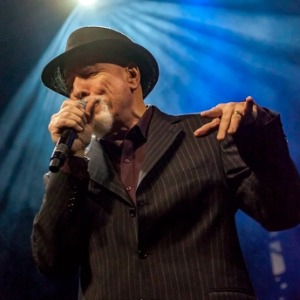 GARY STOCKDALE is a 2-time EMMY-nominated composer, who has composed music for television shows such as Sabrina, the Teenage Witch; To Tell the Truth; Comedy Central’s Last Laugh; Cowboy U; The Independent Spirit Awards; A Home for the Holidays (CBS), and 8 seasons of Showtime’s award-winning Penn & Teller: BULLSHIT! Gary’s well-known theme for that show garnered him an EMMY nomination. He also wrote music for THE ARISTOCRATS, by Penn Jillette and Paul Provenza.

Fresh out of college, Gary met Oscar-winning composer Henry Mancini, under whose mentorship Gary learned the craft of film music composition, as well as singing on many of Henry’s movies.

Since 1990, he’s been the main composer for the “Bad Boys of Magic,” Penn & Teller. Leading the band on their critically-acclaimed variety series Penn & Teller’s Sin City Spectacular, he received his first EMMY nomination for his work on that show.

With Spencer Green, Gary co-wrote the irreverent adult musical BUKOWSICAL!, which opened at the New York Fringe Festival in 2007. After Variety wrote that getting tickets to the sold-out show caused “…a frenzy,” BUKOWSICAL! went on to win the Outstanding Musical Award. A CD of the musical has just been released by Kritzerland Records.

Along with the Film and Television composition, Gary has also been a busy singer and performer. His latest CD Sure Of Mice Elf has become an indy favorite, and he’s been playing various comedy and music venues all over California, and will soon be performing in venues around the country.

As a performer and singer, Gary has appeared in NBC’s Studio 60: Live on the Sunset Strip, was an original member of the Brian Setzer Orchestra, and was a soloist in the cult classic musical TV series Cop/Rock. He has also lent his voice to such films as Avatar, The Simpsons Movie, The Watchmen, and TV’s The Family Guy.

Gary is the recent recipient of a BMI Award for Music Composition for his work on Penn & Teller: BULLSHIT!

Facebook Live Event
Facebook Live Event
Booking Contact
garystockdale@gmail.com
Become a fan!
Get notified when Gary Stockdale plays locally and help support his career. Join the Undiscovered Music community now to become a fan and support all your favorite artists - it's free to join!
Support this Artist!
Help support Gary Stockdale during these difficult times by donating directly to them:
Donate via Paypal
Donate via Venmo