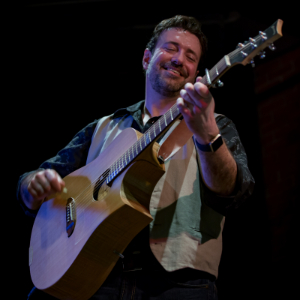 Hailing from the great state of Maine, Dave Rowe, is a traveling troubadour—a singer-songwriter and interpreter of traditional and modern song—whose 30-year career has had him on stages all over the eastern seaboard and throughout America’s heartland.

For years, like most traveling musicians, Dave has lived out of cars and suitcases, eaten in quaint diners and fast-food joints, playing gigs along the way. Armed with a guitar, a dream, a quick wit, a soaring tenor voice, and the heart of an entertainer, he has enthralled audiences everywhere he’s gone, bringing them from raucous singalongs to laughter to tears and everything in between.

Recently, Dave has hatched a new dream to travel the eastern continental US by boat, following the Great Loop, and singing songs along the way. The Great Loop is a 6,000-mile string of navigable waters from the east coast to the Great Lakes via the Hudson River and Erie Canal, down the inland rivers and canals of the heartland to the Gulf of Mexico, and around the Atlantic Intra-Coastal Waterway up the East Coast. For this journey, Dave is giving up his venerable Toyota in favor of a 38-foot Bayliner motor yacht. From the bridge of this vessel, he will see America like very few others have. As he voyages, Dave will of course be playing to new audiences—some perhaps in unconventional or idyllic places—from yacht clubs to canal-side coffee houses and taverns, from small concert halls to historic, little opera houses on the islands of the Great Lakes—this will be the musical journey of a lifetime.

Dave’s music is handmade and heartfelt. It springs from deep roots borne out of the song traditions of Ireland and the British Isles, cultivated in the roots music of North America, and filtered through the musical sensibility of a classically-trained musician who is as at home directing a choir or wind ensemble as he is standing with his acoustic guitar in front of a large audience singing songs together. His original songs come from the heart of a poet and the soul of a maestro, examining subject matter as varied as Dave’s interests, from songs of the sea to historical sketches, from songs of abiding love to social commentary.

The path Dave Rowe took to music was probably unavoidable. Both of his parents were professional musicians—as were both of his grandfathers. Dave’s late father, Tom, was a founding member of the internationally-acclaimed folk trio, Schooner Fare. A lineage and pedigree of which Dave is proud, but to define his music through the lens of what came before would be a mistake. He’s made a name for himself not because of what his father achieved, but in spite of it.

There’s a risk of being pigeonholed when undertaking a similar path to a parent, a hurdle Dave has risen above time and again in his many years on the road and fifteen critically-acclaimed recordings, leading Sing Out! contributor and long-time WFDU radio host, Ron Olesko, to write of the younger Rowe, “To look at his youthful appearance, you would not suspect that Dave has 27 years of experience as a professional musician, but as soon as he takes the stage you can tell that this man is a consummate artist. Dave graces the stage and brings everyone under his spell. The son of the late Tom Rowe of Schooner Fare, Dave has folk music in his heart and soul. Based in Maine, I hope Dave will spend more time performing at venues throughout the country so others can discover the magic he creates.”

Dave’s 2019 floating musical journey will take him through seventeen U.S. states and two Canadian provinces. He with his trusty guitar; his yacht, Stinkpot; and his first mate, Stacey, will rise from sea level to 900 feet above sea level utilizing countless locks on the way. If you find yourself near the waters of the Great Loop and you hear someone singing “Low bridge, everybody down,” some time in 2019 and 2020, there’s a very good chance that there will be a Dave Rowe concert somewhere nearby!

Become a fan!
Get notified when Dave Rowe plays locally and help support his career. Join the Undiscovered Music community now to become a fan and support your favorite artists!

Dave Rowe has been added as an artist you support!