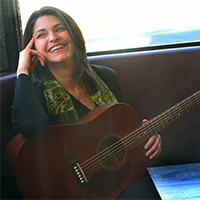 CAROLANN SOLEBELLO is a performing songwriter born and bred in New York City. Best known to folk audiences as a founding member of Americana trio Red Molly, she now tours both solo and with modern folk quartet No Fuss and Feathers.

In the twilight of the 20th century, Carolann’s urban mind was blown during long-term theatre acting jobs in the mountains of East Tennessee and on the Kansas prairie, where she encountered Appalachian music – and the bluegrass and country that grew out of that tradition – for the very first time. Tunes and techniques learned from musicians she met in both places forever changed her approach to songwriting and guitar playing, and ultimately re-charted the course of her career from theatre to music.

Carolann’s smooth, compelling voice and warm acoustic guitar style surely nod to rural folk traditions, yet her decidedly urban sense of rhythm and sophisticated vocal phrasing bend those traditional forms into more contemporary shapes. Her lyrics, always sharp and incisive, delve deeper and wider than ever before on her latest release, Shiver (2018), produced by Joe Iadanza. In each of twelve well-crafted songs, the songwriter digs into existential truth, revealing imperfect, uncertain, frightened, nostalgic, vulnerable, and sometimes unreliable narrators, whose stories – by design or by accident – occasionally intersect with her own.

“Shiver is perhaps my most intimate album to date,” Solebello says. “Though some of these songs feature characters who are purely products of my imagination, each narrator, real or imagined, whispered to me from some unswept corner of my psyche, asking to be heard. It’s not exactly confessional songwriting, but these songs are definitely a window into the room where I keep everything I am afraid of.”

Shiver took shape in several months of pre-production, as producer and songwriter sorted through more than thirty songs written during the past few years to find those that cut closest to the emotional bone and vibrated in sympathy with each other. The dozen that emerged were then polished and arranged to allow each to whisper or howl or plead as it wished. Recorded live in only three studio sessions, Shiver is immediate and real as it gets. Featuring the considerable talents of Craig Akin (upright bass), Jagoda (drums and percussion), Eric Lee (fiddle and mandolin), Paul Silverman (accordion), Catherine Miles (harmony vocals), and Joe Iadanza (producer, acoustic lead guitar), Shiver invites the listener into an intimate concert space with enough room for songs and souls to breathe together.

Before Shiver, Carolann released four solo CDs – Steel and Salt (2013), Threshold (2011), Glass of Desire (2009), and Just Across the Water (2000). In 2016, she collaborated with her No Fuss and Feathers bandmates Jay Mafale, Catherine Miles, and Karyn Oliver to release Traveling Circus. With Red Molly, Carolann released an eponymous EP and three full-length albums: James (2010), Love and Other Tragedies (2008), and the live-before-a-studio-audience Never Been to Vegas (2006).

Carolann is a proud member of the Jack Hardy Songwriters’ Exchange in New York City, and has garnered a number of songwriting awards. She placed first at both the 2011 Susquehanna Music and Arts Festival (MD) and the 2015 Musicians on a Mission Songwriting Contest (NJ), third at the 2014 SolarFest Songwriting Competition (VT), and earned both a Silver Award (Folk/Acoustic category) and the Director's Choice Award at the 2016 Mid-Atlantic Song Contest (DC). Carolann also performed as an Official Showcase Artist at both the Folk AIliance International (FAI) and Northeast Regional (NERFA) conferences in 2012 and 2016, respectively.

With No Fuss and Feathers, Carolann has appeared at Kerrville Folk Festival (TX), Roots on the River (VT), Muses in the Vineyard (NJ), and New Bedford Folk Festival (MA).

Carolann lives in Brooklyn, New York with her husband and son.

Become a fan!
Get notified when Carolann Solebello plays locally and help support her career. Join the Undiscovered Music community now to become a fan and support your favorite artists!

Carolann Solebello has been added as an artist you support!