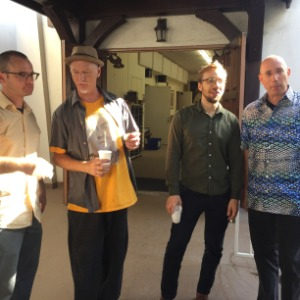 As a member of BMI since 1985 Dutz has produced numerous albums as a leader and composed the entire body of music on more than thirty albums. He is the owner of the publishing company leaky spleen music [©BMI]. The ensembles he has written for cover a wide range of instrumental combinations. In 1990 Dutz started his composition studies of multiple scores mainly of 20th century music. He has studied with composers such as Terry Plumery, Ron Jones, RUSSELL STEINBERG. In addition to CD projects he has composed for Dance companies, Theatre, Documentaries (including Shirkers 2018), Movies, and Silent Films. Over the last twenty years, his compositions have been featured on numerous CD releases. Everything from solo pieces to large ensembles are featured on his albums. This year saw the sixth release;’”Dispose of Reality“’ of his quartet project that is now in its 15th year. This ensemble showcases the unique combination of mallet percussion, oboe, cello, and bass clarinet and has performed on prestigious stages such as the Angel City Jazz Festival, Boston Court, and The REDCAT Theatre. Other recent ensembles include - The Other Three (Kim Richmond, John Fumo), Obliteration Quartet(Found objects for percussionists), and duo CDs with reedists Vinny Golia and Jasper Dutz, percussionists Dr. Rich Macdonald and Chris Wabich(feat. Ben Wendel, Alex Acuna & Emil Richards).
As an educator, Brad has been percussion faculty at Cal State Long Beach since 1997. He has conducted hundreds of clinics at colleges and high schools on a variety of topics and in 1995 was featured on four video lessons (“‘Have Fun Playing Percussion) teaching newcomers about hand percussion for Warner Bros. He also has two lessons available for download on
https://www.mymusicmasterclass.com/premiumvideos/brad-dutz-blending-electronic-acoustic-percussion-masterclass/ My Music Masterclass. Dutz was also selected on twelve different years to perform and present at the International Convention for the Percussive Arts Society. He currently teaches World Music and Composition to children ages 9-11 for the Pasadena Conservatory of Music. In addition, for four years Brad wrote a monthly column for Drum Magazine on hand percussion and he has written three books full of his compositions: Manipulations In Sound And Time, Music for Hand Percussion, and Percussion Pieces For Duos, Trios and Quartets.
He has done master classes, lectures and concerts featuring his composition at many schools including Cal Arts, NIU, Winona State in MN, Cal state LA, Indiana University, UNT, Weber college, USC, UCLA, EIU, ISU, U of I, Pierce college, Brigham Young, and many others. His percussion ensemble work “Freaked out“ debuted in 2014 at Elmhurst College in Illinois and has been performed at six other universities including a one week residency at Saint Olaf in Northfield MN. He has recorded CDs as a sideman for a variety of artists including Scott Henderson, Steve Smith, Phil Woods, Carl Saunders, Alanis Morrissette, Kim Richmond, Willie Nelson, Bear McCreary, Bill Cunliffe, Bevan Manson, Scott Kinsey, Kat Edmonson, Kiss, David Benoit, Phil Norman, Grant Geissman, Jeff Berlin, Scott Whitfield, Dennis Dreith, Leo Kottke, Ricki Lee Jones, Michael Wolff, Mark Masters, Steve Owen, Nels Cline and many others

Become a fan!
Get notified when Brad Dutz Quartet plays locally and help support their career. Join the Undiscovered Music community now to become a fan and support your favorite artists!

Brad Dutz Quartet has been added as an artist you support!