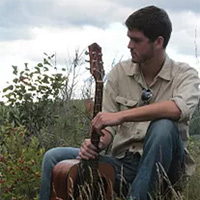 Alex Smith grew up in Long Lake, in the rural heart of New York's Adirondack Park, and
his music strives first and foremost to echo the people and culture of that area. He builds songs
from a blend of traditional folk harmony and strikingly modern lyrics, confronting today's most
pressing issues with a style of honest and accurate observation often compared to songwriters
Stand Rogers and Jason Isbell.
Smith's mother is a historian and his father is a writer and boat builder. Their influence is
evident in his attention to detail: each of Smith's characters lives and breathes a balance between
beauty and imperfection. His stories draw on the triumphs and hardships of friends, relatives, and
neighbors near and far.
Smith is truly a “working musician,” playing nearly 200 a shows a year. In the fall of
2012, at the close of his first extensive summer tour, Smith signed with acclaimed folk label
Wepecket Island Records. He has since toured internationally both solo and with his band The
Mountain Sound, been featured on Emmy-Award winning documentary “Songs To Keep”
alongside Pete Seeger, Peter Yarrow, and Dan Berggren, won an NTCMA award for his record “
Hamilton County,” and received extensive radio play nationwide.
Sarah Craig, director of the legendary Caffe Lena in Saratoga Springs, NY, calls Smith “
A natural storyteller with a rich voice who is creating poignant songs rooted in the heritage of his
Adirondack home,” while Country Music News International’s Bob Everhart says he is “a
wonderful, poetic writer who captures words full of meaning, matching them with creative music
that creeps quietly into the past at the same time as dancing with the present and sneaking a peek
at the future.”
When he's not on the road, Smith splits his time between the Adirondacks and Leicester,
VT. His second studio album, Hamilton County, was released in June 2014 and was quickly
followed by Close to Home in the spring of 2015. Live from Caffe Lena was recorded in March
of 2017 and will be Smith’s next release.

Become a fan!
Get notified when Alex Smith plays locally and help support his career. Join the Undiscovered Music community now to become a fan and support your favorite artists!

Alex Smith has been added as an artist you support!