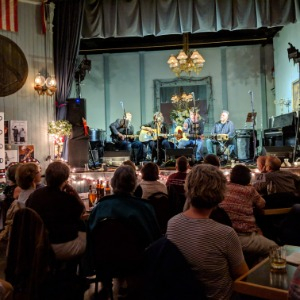 BBQ from the Smokin' Rock 'n Roll food truck on the ALUCC grounds! Then a concert w/Anne E. and the Band in the Sanctuary ? a journey that leaves you on an emotional high!
-> read more
Anne E. DeChant is first and last a story-teller, an artist who writes with the shit-kicker urgency and sweet understanding of the people who stumble and keep keeping on. A Nashville recording artist originally from Avon Lake, Ohio, she is a 5-time winner of Cleveland's Singer-Songwriter of the Year, and a 2020 Kerrville Folk Festival Songwriting Competition Finalist. DeChant has performed with Melissa Etheridge, Sheryl Crow, Stevie Nicks, Don Henry, Travis Meadows, and was the selected local artist at Lilith Fair (Cleveland 1999). She has delivered stand out shows in storied venues ranging from the Bluebird Café, The Bitter End, The Evening Muse, The Alabama Country Music Hall of Fame, to The Clinton White House. Anne E. DeChant's unmistakable voice expresses perfectly her songwriter's perception, beginning from her days as the dynamic lead singer of Cleveland fan favorite, Odd Girl Out. With nine studio album releases to her credit, her masterfully crafted, poignant songs move the listener from one world to another with mesmerizing effect. Anne E. released her first 'best of' record, "Every Little Everything" in 2020, fan funded and Nashville produced by Mike Severs. Her 2017 fan-funded release, “The Sun Coming In”, climbed to #6 on the Roots Music Report’s national chart, and its first single “Sunday Morning Drive”, to #1. “There’s virtue in honesty, and in intuition, and in openness, and in tough-minded decency. Those things may or may not make for fine art. In the hands, heart, and voice of Anne E. DeChant, they may, they might, and they do.” -Peter Cooper (Museum Editor, Country Music Hall of Fame, Nashville)

32801 Electric Blvd
Avon Lake, OH
avonlakeucc.org
The Avon Lake United Church of Christ is a church that welcomes all people who are seeking a deeper relationship with God, a life patterned on the life of Jesus, an opportunity to make a difference for good in the world. Our membership includes people who live in Avon Lake and all its surrounding communities; we are made up of singles, couples, families; we welcome persons of any age, color, ability, or sexual orientation. We come from dozens of different religious backgrounds, and we are politically and culturally diverse. As the oldest church in Avon Lake, established in 1896, we are known as a community church.
Anne E. DeChant at Avon Lake UCC 9-17-2021
Support this Artist!
Help support Anne E. DeChant during these difficult times by donating directly to them:
Donate via Paypal
Donate via Venmo
Donate directly
Become a fan!
Get notified when Anne E. DeChant plays locally and help support her career. Join the Undiscovered Music community now to become a fan and support your favorite artists!

Anne E. DeChant has been added as an artist you support!