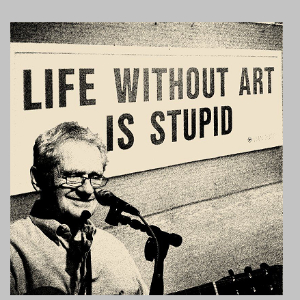 Had Art Podell kept a diary, it would have been a rich chronicle of the life of a folksinger during the Folk Era and as a songwriter in the years since, spiced with a healthy serving of laughter. Unfortunately, he didn’t. Instead, at the coaxing of friends and former folkies, he is spilling the beans on stage.

He began in Greenwich Village with friend and fellow musician, Paul Potash. Art and Paul released two albums on Columbia Records. The first -- "Songs of Earth and Sky" -- is considered a folk classic and is rumored to have influenced the early recordings of another "Art and Paul" (Garfunkel and Simon). (Begrudgingly, Art finally admitted last year that they were “pretty good.”) In the Village, Peter Yarrow, their friend, shared a new song with them called "Puff, the Magic Dragon" and it was Art and Paul who first recorded the song in 1961 -- well over a year before Peter, Paul and Mary's version. In 1961, the boys headed west to the L.A. folk scene. "We were so successful," Art remembers while scratching his head, "we broke up." Art turned to songwriting and was immediately signed to Henry Mancini’s publishing company. In short order, he had songs recorded by Rod McKuen, The Smothers Brothers, Glenn Yarbrough, Joe and Eddie, Bud and Travis, Barry and Barry, and, eventually, The New Christy Minstrels, whom he joined as one of the original members in 1962 until

1966. Anne Murray’s Christmas classic “Christmas Wishes” was co-written by Art with Randy Sparks. Quite a ride -- from the Troubadour to Carnegie Hall in less than six months…national TV, college concerts, European tours, and performances at the White House.

After he left the Minstrels, Art’s long music experience led him to A&M Records Almo-Irving Publishing Companies during the late sixties and early seventies where he was hired as Professional Manager. He stuck around long enough to introduce the company to Paul Williams, a young songwriter he discovered through his old friend Van Dyke Parks. Williams was signed immediately.

Art continues to write and perform. He recently appeared in concert with his friend Peter Yarrow and is in constant demand for folk music festivals and tribute shows as host and featured artist. He hosts a monthly segment of "Roots Music and Beyond" on KPFK 90.7 FM Radio in Los Angeles, a Pacifica Station. He also is a regular columnist and reviewer for Folkworks.org, a Southern California Newsletter that services close to half a million devotees of the folk and traditional music and dance community.

"Art Podell presents an evening of music, laughter, songs, stories and memories shared through his signature story/songs. He sometimes divulges a few secrets about friends -- famous and not. (Consequently, he is currently looking for a qualified bodyguard – preferably one who plays bass).
"I thought I was watching and listening to Will Rogers with an Ivy League education and maybe that's true, but your humor and songs - both touching and delightful - was better and much more enjoyable than his lasso"-Herb Freed, Film-maker, novelist and friend

“Songs of Earth and Sky” and “Hangin’ Drinkin’ and Stuff”, Art and Paul’s original albums for Columbia Records were re-released digitally by Sony Music in the summer of 2019. They can be found on all the music streaming platforms.

Art’s CD ‘From The Village To The Canyon – A Songwriter’s Journey’ is available on Art’s web site, ITunes, and CD Baby.

Art Podell has been added as an artist you support!