TOM PAXTON, CATHY FINK & MARCY MARXER ALL NEW – Live Album Recording With Kimber Ludiker (fiddle, mandolin) & Alex Lacquement (bass) Sat, Jan 22, 2022 @ 7:30PM / Sun, Jan 23, 2022 @ 3PM Allyworld, 7014-C Westmoreland Ave, Takoma Park MD 20912 This live concert recording session celebrates a catalogue of nearly thirty new songs co-written by Tom Paxton (GRAMMY Lifetime Achievement Award Winner) and Cathy Fink (GRAMMY Winner) in the past eighteen months. Comedy, Community, Absurdity, History, Commentary and Love are spread throughout these new classics. The title song, “ALL NEW” tells us we are capturing a moment, together. The intimate audience will be invited to sing along on many songs, and will add their good vibes to these very special shows. Tickets are $50, but for $60 you'll get the album ALL NEW when it comes out! MORE ABOUT CATHY FINK AND MARCY MARXER : TWO-TIME GRAMMY® Award Winners, Cathy Fink & Marcy Marxer Marxer are master musicians with a career spanning over 35 years. Their superb harmonies are backed by instrumental virtuosity on the guitar, five-string banjo, ukulele, mandolin, cello-banjo, and more. Their repertoire ranges from classic country to western swing, gypsy jazz to bluegrass, and old-time string band to contemporary folk (including some original gems). Cathy & Marcy have performed at hundreds of bluegrass and folk festivals and taught at close to 100 music camps worldwide. Happily known as “social music conductors” ready to start a jam session, a community sing, or create a music camp helping others learn to play and sing, the duo’s past students include Kaki King and Rhiannon Giddens. MORE ABOUT TOM PAXTON : Tom Paxton has become a voice of his generation, addressing issues of injustice and inhumanity, laying bare the absurdities of modern culture and celebrating the tenderest bonds of family, friends, and community. In describing Tom Paxton’s influence on his fellow musicians, Pete Seeger has said: “Tom’s songs have a way of sneaking up on you. You find yourself humming them, whistling them, and singing a verse to a friend. Like the songs of Woody Guthrie, they’re becoming part of America.” Pete goes on: “In a small village near Calcutta, in 1998, a villager who could not speak English sang me What Did You Learn In School Today? in Bengali! Tom Paxton’s songs are reaching around the world more than he is, or any of us could have realized. Keep on, Tom!” 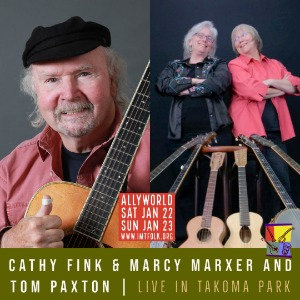