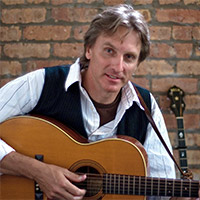 The Chicago Tribune has called Mark Dvorak “masterful,” and the Fox Valley Folk Festival describes him as “a living archive of song and style.” In 2012, WFMT 98.7 fm Fine Arts Radio named him “Chicago’s official troubadour.”
-> read more
Mark Dvorak is the third son of four, born to a working class family on Chicago's southwest side. After reading Anthony Scaduto's biography of Bob Dylan in high school, his interest in American folk music was born. Soon the recordings of Woody Guthrie, Lead Belly and Pete Seeger found their way into his collection. He purchased his first acoustic guitar while working in a xylophone factory in LaGrange, Illinois, and enrolled in classes at Chicago's Old Town School of Folk Music after a summer of traveling the country by motorcycle. In 1981 he performed at the Fox Valley Folk Festival in Geneva, Illinois for the first time, and later that year opened a performance venue, "The Old Quarter Coffee House,” named after the legendary Houston club where Townes Van Zandt recorded a live album in the early seventies. Three years later, new owners took control of "The Old Quarter," and it grew into a full-time club, booking national acts and hosting classes and workshops. After a successful run of six years, "The Old Quarter" was reorganized again, this time as the non-profit Plank Road Folk Music Society, which celebrated its thirtieth anniversary in 2016. Dvorak spent six years on the board, wrote and edited the newsletter, served two terms as Plank Road president, and still remains close to the organization. In 1982 Dvorak borrowed a five string banjo and began teaching himself how to play. It was through the mentorship of old-time string musician Don Buedel, from Cantrall, Illinois, that Dvorak was first able to master the claw hammer stroke. In 1986 Dvorak joined the faculty of the Old Town School of Folk Music in Chicago. He soon became embedded in the Chicago acoustic scene, collaborating with many dozens of artists and students, befriending Old Town founders Win Stracke, Frank Hamilton, Eddie Holstein and many others. Dvorak continues to be an integral member of the Old Town School faculty, where he is artist-in-residence. In the summer of 1990, Dvorak set out on his own towards Louisiana, in search of the grave Huddie Ledbetter, known the world over as the great Lead Belly. The trip was chronicled in the 1993 documentary, "Lead Belly's Legacy," produced for WDCB public radio in Glen Ellyn, Illinois. The show aired in one hundred sixty cities and earned Dvorak a Peter Lisagor Award for journalism. In 1995, Dvorak released his first CD specifically for young listeners on the Depot label. "Old Songs & New People" was a notable success, winning the Parents' Choice Gold Medal Award and leading to hundreds of nationwide performances for arts-in-education and community audiences. By 1998, Dvorak had performed at venues throughout the Midwest, had toured the east coast and released his classic "The Streets of Old Chicago," which documented some of his experiences performing in Chicago and teaching at the Old Town School. 1998 also marked the beginning of a long collaboration between Dvorak, song writer Michael Smith and singer Barbara Barrow as they embarked on a six month rehearsal schedule for the touring performance, "WeaverMania! LIVE." WeaverMania! celebrated the sounds and songs of the legendary folk group, The Weavers, and gave more than two hundred concert performances between 1999 and 2007. The group continues to make occasional concert appearances and festival performances. WeaverMania! released their only CD, "WeaverMania! LIVE," in 2000. In 2005, Dvorak went back into the studio to record "Every Step of the Way," a personal breakthrough project which featured ten original songs. Released by Waterbug, "Every Step of the Way" was well-received and established Dvorak as a song writer. 2008's "What a Wonderful World," also released by Waterbug, was a fifty-seven minute compilation of material from Dvorak's earlier CDs. The project was aimed for family audiences and also included a newly recorded, four song collaboration with Chicago's Sons of the Never Wrong. Also in 2008, Dvorak received the Woodstock Folk Festival's Lifetime Achievement Award for his work as a performer, song writer, teacher and folk historian. In the spring of 2010, Dvorak began planning his next recording with producer John Abbey of King Size Sound Lab. The next year, Waterbug released "Time Ain't Got Nothin' on Me," to glowing reviews; to date Dvorak's most successful recording project. "Time" received steady airplay and rose to number fourteen on the Folk DJ chart, and made it to number twenty-three on the Cashbox National Folk Chart. The disc featured twelve Dvorak originals and a Chicago all-star cast of singers and instrumentalists. In 2012 WFMT's Rich Warren, host of "The Midnight Special," named Dvorak "Chicago's official troubadour," a sobriquet previously given to Old Town School of Folk Music founder Win Stracke, and later to seminal folk singer and Dvorak mentor Fred Holstein. The Midwest region of Folk Alliance International (FARM) named Dvorak the 2013 Lantern Bearer Award recipient, an award presented to an individual who has contributed to folk performance arts and the folk music and dance community for twenty-five years or more. In December of 2013, Dvorak published his first collection of essays and poems, "Bowling for Christmas and Other Tales from the Road." The book sold out of its initial printing in nine days and received glowing reviews. Dvorak continues to perform more than two hundred dates each year and looks back on a thirty year career woven from the disparate threads of touring musician, educator and community builder.
Attend in-person

Listening rooms typically sell tickets to their shows. You can find out more on their website. But if your prefer, fill out the form here and we'll let this venue know you are interested in attending.
Mark Dvorak at Lake County Folk Club 6-20-2021
Become a fan!
Get notified when Mark Dvorak plays locally and help support his career. Join the Undiscovered Music community now to become a fan and support your favorite artists!

Mark Dvorak has been added as an artist you support!