House concerts are a growing trend across the country, where people invite friends and neighbors into their homes for an up-close concert experience. And there are several house concerts being held in and around the New Martinsville area that you can check out - you just need to contact the host and ask to be invited.

Churches and non-profit community groups around New Martinsville host occasional coffeehouses that feature traditional folk musicians and other acoustic artists as a way of bringing the community together.

In addition, live acoustic music can be heard in many listening rooms and small theaters in and around the New Martinsville area. Restaurants and cafes in the area sometimes also host nationally touring musicians. 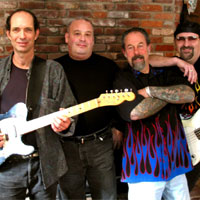 The Nighthawks
Playing at Thunderbird Cafe (Bar/Nightclub)
Join the Community!
Join the Undiscovered Music community now to get notified about upcoming shows in your area!

Places to See Live Acoustic Music
in and around New Martinsville, WV