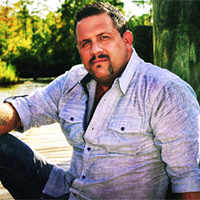 Sean Gasaway is an award winning singer songwriter. With over 100 cuts, Sean writes and produces records for artists as he tours across the U.S. playing clubs, restaurants, and house concerts.
-> read more
Sean Gasaway is an award winning singer/songwriter, publisher, record executive, and record producer. Sean was born on the Mississippi Gulf Coast, and now resides in Nashville, TN. Sean's incredible popularity and high demand has led to performances of his hit "Stomp" and The National Anthem in front of 75,000 Pittsburgh Steeler Fans at Heinz Field, back to back Native American Music Awards for Song and Single Of The Year (2017 & 2018), songs played on the NBC Today Show, feature shows at the World Famous Bluebird Café, International Festivals including The Frank Brown International Songwriters Festival, year round performances at the World Famous Flora~Bama, Feature Artist with The Last Honkytonk Music Series, various House Concerts from the Gulf Coast to New England, major publishing and record deals in the US and the UK, garnering over 100 songs cut, four #1 songs on the Americana and Independent charts, six Top 40 on Billboard and Independent Charts, songs in major movies, documentaries, NFL Sports, as well as his highly acclaimed 2016 album release "Mississippi Vol. 1" and 2018 release "Mixtape, Mississippi". Sean has been in the music business for over 25 years writing, performing, producing, and touring with bands including 3 Doors Down, Cowboy Troy, Mickie James, The Ying Yang Twins, Deborah Allen, Ray Scott, and Kat Perkins to name a few. Singer/Songwriter/Producer Sean Gasaway, Mississippi boy, has become a hurricane-like force to be reckoned with.
Attend in-person

Listening rooms typically sell tickets to their shows. You can find out more on their website. But if your prefer, fill out the form here and we'll let this venue know you are interested in attending.
Live In The House w/ Sean Gasaway
Become a fan!
Get notified when Sean Gasaway plays locally and help support his career. Join the Undiscovered Music community now to become a fan and support your favorite artists!

Sean Gasaway has been added as an artist you support!