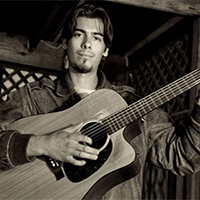 "Zack Freitas rock and roll stylings can be energetic with heavy guitar riffs and in an instant can switch to a ballad with warm, heartfelt lyrics. A major part of his path to playing music comes from the untimely passing of his cousin; Freitas considers his career a literal life saver. He's laid down two full-length studio albums, frequently tours California, and recently went to Europe. His latest release Desolation Animals is a dreamy journey of sound that swings between pop, rock and psychedelic sounds as if he's several musicians living in the same body.”- Monterey County Weekly
http://www.montereyherald.com/arts-and-entertainment/20171025/beth-peerless-zach-freitas-pours-his-soul-into-new-recording

"Zack Freitas has coined a term. You might in fact see it one day as one of his album titles, perhaps of a greatest-hits collection some-where around 2030. Call him an “opti-nihilist.” Sure, it’s an incongruous clash of attitudes about life: high-energy optimism crashing into dark-side nihilism. But that’s the ground you stand on when you’re a 26-year-old aspiring artist, trying to achieve escape velocity from a potential life of addiction while giving personal ambition its due. “There’s a light at the end of the tunnel,” he said. “You just have to understand the shadows to get there.”
Freitas is at the point in his career where he’s soaking up his influences, and they’re all in evidence in Oblivion—the free-associating fun and raw energy of The Pixies, the introspection of Wilco and REM, and the song-writing fearlessness of Elliott Smith.” - Metro News
https://issuu.com/metrosiliconvalley/docs/sbm1845

Ryan Mulligan, Santa Cruz - Zack was a phenomenal performer at my wedding! The venue wouldn't allow us to a PA, and it was amazing that we could still hear his voice over the rest of the band and the chatter going on. At the end of the reception, he had everyone singing along to my favorite band Oasis. I highly recommend this upcoming talent for your next event. We love Zack!

Steve Ulrich, Monterey - Zack has incredible range and projection. He is downright refreshing and entertaining. His personable attitude and vibe makes the whole room happy to be rocking out together!

C Paul Bataille, Monterey - This dude is flat Magic. He keeps you jammin all show long, and wanting more. This is a perfect fit for the layed-back atmosphere of the Monterrey area. WAKE UP PEOPLE, THIS AINT NO DRESS REHERSAL!

Rebecca Corvese, Monterey - Zach is amazing! His voice is so unique and he has a beautiful way of interacting with the audience that draws them in, and keeps them there with his amazing songs!

Angelica Sanchez, Salinas - I have had the pleasure of meeting this young man late last year and I have followed his music ever since. He is a poet and a genuine artist with the talent that will leave you wanting to hear more. I grew up in a family of musical talents, so I appreciate soulful, meaningful and engaging music. This artist is the best I’ve heard in a very long time. I guarantee that given the opportunity he will amaze you and the audience. Best regards, Angelica

Become a fan!
Get notified when Zack Freitas plays locally and help support his career. Join the Undiscovered Music community now to become a fan and support your favorite artists!

Zack Freitas has been added as an artist you support!