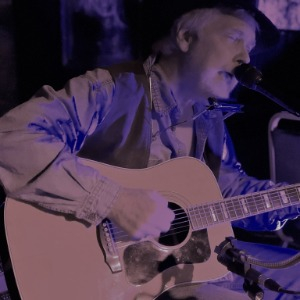 DON STEPHENS, also known as STRINGMAN DELIVERY, has been playing electric and acoustic guitar, piano, bass pedals and harmonica professionally for over thirty years. He began his music career playing coffee houses and clubs in Indiana in the mid-'70s. His sound is heavily influenced by the rock bands and folk artists of that time including Neil Young, Moody Blues, Bob Dylan, Roger McGuinn, Tom Waits and others. Don is a prolific songwriter and currently has seven albums released and all are available online for listening and CD sales at Stringman Delivery shows. Depending on the venue, Don can play a full acoustic show or include a set list with electric rock tunes. Although primarily a singer/songwriter artist, Don uses the band name STRINGMAN DELIVERY to keep the flexibility of adding band members if appropriate for the venue.

ERIC ZAWADZKI has mixed sound professionally dating back to the days when Molly Hatchett and Lickety Split toured together. Eric was also the sound engineer for a group called New Math... a band that headlined numerous shows in and around New York and also opened for other major East Coast concert events featuring names like The Plasmatics and The Ramones. Eric's uncanny ear for sound is taking Stringman Delivery to new levels.

"Now, if Stringman Delivery is ever looking for an opening act, then the aforementioned The Rising wouldn’t offend the audience. Because the Strings (as I shall call them) take their influences from the likes of Neil Young, the Byrds and Tom Petty. Led by Don Stephens, who has previously released acoustic albums, he can trace his roots back to playing coffee houses in the mid-’70s. Now he’s hooked up with guitarist Gary Stephens, drummer Mike Cerny and bassist Terrell Mabrito for an electric outing which will appeal to fans of Tom Petty and his ilk. They’ve got some good tunes under their belt with the likes of ‘A Game Called Love’, ‘A Long Way To Go’ and ‘Why Am I Trying So Hard’ more than enough to make fans of their heartland rock very happy indeed."

"From San Antonio, TX we find classic rock blues artist STRINGMAN DELIVERY, who have a fabulous eleven track CD out now called 'Tonight We Ride' that is well worth checking out and borders between Americana, rock and blues through to melodic pop, the songs flow with majestic passion. Singer Don Stephens has a fantastic diverse voice that is somewhere between Don Henley, Tom Waits, Brian Wilson, John Cougar Mellencamp, Neil Young and the late Dan Peek. Stringman Delivery are Don Stephens – lead guitar, keyboards, harmonica, and Eric Zawadzki - sound technician..."

"A quintet from Texas fronted by a guy called Don Stephens (who wrote each song) who are very retro American folk kind of a way to put it, but with a laid back rock style about them too. There are many standouts that include a very Neil Young like 'A Game Called Love' and 'Why Am I Trying So Hard' that would be the perfect foil for a Woody Allen Movie. The album is very soothing, almost quirk and laid back with lyrics about ordinary day to day topics such as 'I Think I'll Go to the Dance' with a marvelous distortive echoing guitar work 'Should I Turn Back' or 'The Rules of the Road'. Overall think Bob Dylan and Neil Young!"

Become a fan!
Get notified when Stringman Delivery plays locally and help support his career. Join the Undiscovered Music community now to become a fan and support your favorite artists!

Stringman Delivery has been added as an artist you support!