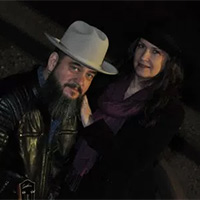 Sands & Hearn are husband and wife singer/songwriters Quinn Sands and Richard Hearn, out of Cleveland, Ohio. Both Quinn and Richard are multi-instrumentalists who began writing and performing together shortly after meeting in June of 2015. Their style is best described as alt. folk/Americana - a unique blend of their musical backgrounds and influenced by the roots of American music, with an emphasis on the story and sweet harmonies.

In 2017, they released their first album, entitled Time Is A Line, which features a line-up of some of the most talented musicians from Northeast Ohio. Ireland’s Lonesome Highway Magazine published a review of Time Is A Line, by reviewer/writer Paul McGee, who also included it in his Best of 2017 Year End list.

Live, they’ve performed primarily as a bass & guitar duo, often switching to various other instruments such as glockenspiel, Shruti-box and various percussion instruments (often played with their feet) at venues around the Northeast, Ohio area, such as at the Beachland Ballroom & Tavern, the Brother’s Lounge and at the legendary Barking Spider Tavern. They’ve also performed at the Painesville Party in the Park, Spice Acre’s Plated Dinner events, the Lorain County Fair, Walk All Over Waterloo, the 2018 Lake Erie Folk Festival, private house concerts, The Factory in Sharon, PA and at the Bloom Café & Listening Room in Bristol, TN. They have opened for such legendary performers as Tommy Womack, Ray Bonneville, Maria Muldaur, Rod Picott and Kevin Gordon, and other national acts such as The Ragbirds and Brent Cobb. In 2018, they performed in Dublin, Ireland at the legendary Whelan’s Bar (in support of Brent Cobb) and The Underground Live Music Venue.

Become a fan!
Get notified when Sands and Hearn plays locally and help support their career. Join the Undiscovered Music community now to become a fan and support your favorite artists!

Sands and Hearn has been added as an artist you support!