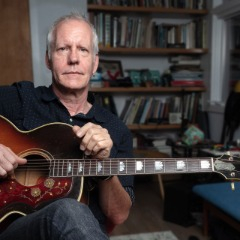 The album includes a collection of very personal songs that Rod penned while on the road last year. The title song “Normal Isn’t Normal Anymore” was written over a year ago and since the pandemic hit last March, the song has taken on a whole new meaning. In "Another Year", Rod tells real life stories of everyday people, the personal challenges they face and how we all need help from each other to get through those challenges. Sometimes a challenge turns into a blessing as with Rod’s song from the lighter side of life with his “Birds In The Chimney”. It’s a tale about chimney swifts that hi-jack Rod’s chimney and party like it’s Woodstock. With such a happy ruckus they eventually turn Rod’s frown into a smile and leave what was once a lonely house into a happy home again. Rod’s song “My Father Was A Quiet Man” is a poignant and loving tribute to his father and reminds us how much a father can care for his family without using words to tell them. The album also features two of Rod’s cool and frenetic guitar instrumentals like “Over The Fence”, a rollicking 6-string instrumental adventure about the family coonhound who jumps the fence and roams the downtown area for hours.

Rod is the 2019 Winner of American Songwriter's Bob Dylan Song Contest. His last album The Man I'm Supposed To Be reached the top 10 in 2018 on the Folk DJ Chart and he's performed as a featured artist at folk conferences and clubs nationwide including Folk Stage in Chicago and Club Passim in Cambridge, MA. His songs and instrumentals revolve around family, friends and places across his home state of North Carolina and the Deep South and evoke styles of his favorite guitar players like Leo Kottke, Michael Hedges and Tommy Emmanuel. Rod collaborated on The Man I’m Supposed To Be with legendary producer Don Dixon (REM, Marti Jones, The Smithereens, Marshall Crenshaw) recording the basic tracks at Buddha View Studios in Charlotte, NC. All tracks were mixed by Rod at 1101 Studios in Raleigh, NC and produced by Rod, Dixon and Kari Estrin. Star performances include John Teer of Chatham County Line on mandolin, Joe Newberry on banjo, Caitlin Cary and Susan Cattaneo providing background vocals, and Pattie Kinlaw Hopkins of Hank, Pattie and The Current on fiddle.

Rod has been a major force in the North Carolina music scene for decades, having played in North Carolina 80’s bands Arrogance and Glass Moon and recorded albums for major labels Warner Bros, MCA and Elektra Records. As a composer, he has scored and produced music for over 80 video games including the Electronic Art's blockbuster hit "Dead Space" which won a BAFTA Award in 2009 for Best Original Score and Tolkien's "The Hobbit" for Vivendi Universal which won Video Game Soundtrack Of The Year in 2003. Rod is also an adjunct professor of music composition at the University of North Carolina School of the Arts in Winston Salem, NC and supported an active touring schedule until the recent Covid-19 quarantines.

Become a fan!
Get notified when Rod Abernethy plays locally and help support his career. Join the Undiscovered Music community now to become a fan and support your favorite artists!
Support this Artist!
Help support Rod Abernethy during these difficult times by donating directly to them:
Donate via Paypal

Rod Abernethy has been added as an artist you support!