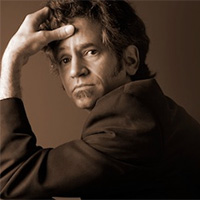 Noah Zacharin is a widely acclaimed guitar master, multi-genre songwriter, and dynamic performer. In December 2015 Zacharin became a full-time recording and touring musician. Born in Montreal, Zacharin splits his time between Toronto, the road, and an off-grid cabin on the Canadian Shield.
"A stunning guitarist...no stylistic boundaries" (Holger Peterson, CBC, Stony Plain Records);
"A wonderful songwriter and performer" (Paul Mills, Borealis Records);
"A poet, a songwriter, a singer we have been waiting for" (the late Penny Lang);
"One of the best songwriters this country has produced" (the late great Rick Fielding, recording artist, radio host);
"Deserving to be mentioned in the same breath with names such as James Taylor and David Wilcox" (Minor 7th, Dec 2000);
“Like Bruce Cockburn, Ry Cooder, and Bonnie Raitt, Noah Zacharin possesses a virtuoso command of the guitar...world-wise songwriting" (Minor 7th, June 2002);
"A wonderful singer-songwriter and absolutely brilliant finger-style guitarist." David Essig.
Noah Zacharin has recorded eight CD’s of original music. All have garnered popular and critical praise. His seventh, Strange Rider made a number of ‘Best-Of’ lists for 2016, while, most recently, A Startle of Wings, charted #6 on the Folk DJ list for November 2018. Recording of his ninth CD will begin in the New Year, co-produced by a well-known Canadian musician. Also in the works is a DVD re-release of fan-favourite Waiting on Your Love which will include ASL video and previously unreleased work from the original sessions.
As a soloist he has opened shows for Odetta, David Lindley, Dave Van Ronk, Jesse Winchester, Alex de Grassi, and Fairport Convention, and performed internationally in 100's of venues from club to concert hall.
As a producer and instrumentalist he has performed with some of Canada's finest and appears on some 60 recordings from across North America.
As a songwriter, his songs have been recorded by popular performer and radio host Laura Fernandez (who translated the song into Spanish), Rolling Stone (India) Cover Artist Rehan Dalal, and double-slide master, the late Brian Cober.
He has officially showcased at BC Contact (2008), FARM (Oct 2016), and SERFA (May 2017).
Noah Zacharin is also an award-winning poet ("a remarkable ability to articulate efficient, powerfully condensed ideas": What 18/19) and translator, having won McGill’s Chester-Macnaghten poetry prize and Matrix Magazine’s translation prize. He has published hundreds of poems, translations, and reviews, in periodicals and anthologies worldwide, and is currently at work on several volumes of poetry, and a number of children's books.
In his spare time Zacharin reads, cycles, walks, and practices tai chi and kung fu.

Become a fan!
Get notified when Noah Zacharin plays locally and help support his career. Join the Undiscovered Music community now to become a fan and support your favorite artists!

Noah Zacharin has been added as an artist you support!