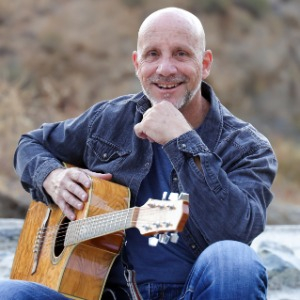 Born and raised in Los Angeles, Moran’s introduction to playing music came through his father’s banjo playing and folk music.

“I remember my dad sitting at our dining room table recording Dylan’s, ‘Blowing in the Wind’ on a cassette recorder. He had this powerful low voice. I probably wore that cassette out.”

When he told his father he wanted to play guitar, he was directed to a mostly-unused Guild classical guitar, a Mel Bay book of chords, and his father’s copy of, “How to play the 5-string Banjo” by Pete Seeger.

This armed him with three chords (and the truth) and the ability to play, “The Crawdad Song”, “This Land is Your Land”, and after adding a minor chord, the aforementioned, “Blowing In The Wind.”

Soon after came Gordon Lightfoot, Glen Campbell, and Peter Paul & Mary. And then, Led Zeppelin, The Eagles, and James Taylor.

“Acoustically driven, storytelling music made up my earliest influences,” Matthew recalls.
“I mean, I played plenty of hair-metal in the ‘80’s but always returned to more acoustic roots.”

Songwriting started early but sporadically although Matt still performs a couple songs that were written in high-school and soon after.

In 2007, Matt began performing at open-mics around Phoenix, Scottsdale, and Cave Creek, Arizona. He found a home at a weekly open-mic at the now shuttered Cave Creek Coffee Company (C4). C4 had a restaurant and wine-bar and a 250 seat backstage area known as “The Camp” where national acts performed. The owners often selected locals from the open mic to open at The Camp and to play the wine bar.

“Being asked to play the wine-bar was an exciting step. Plus, you made a little money. Being asked to open in ‘The Camp’ was also inspirational - allowing me to perform for a larger audience and one that was focused on the music.”

Moran self-recorded his first CD, “Girls, Songs, and Other Delusions” - and immediately self-booked his first tour - a 10 day stint through Arizona, New Mexico, and Colorado.
“I learned a lot on that tour. I didn’t make any money but I actually made enough to pay for gas and eat. I consider that a rousing success.”

Matthew moved back to Los Angeles in 2009. After performing with some talented musicians in Arizona and California, he began seeking out band mates and formed, “The Matt Moran Band” with drummer, Tom Galella and lead guitarist, Steve Schmitt - son of legendary engineer, Al Schmitt.

More recently, Matt has jumped more fully into recording and producing, as a way to bring his brand of Americana and acoustically-driven rock and roll, to his audience.

April Songsalive! Song Sessions - Lessons From a DIY Songwriter with Matthew Moran
Become a fan!
Get notified when Matthew Moran plays locally and help support his career. Join the Undiscovered Music community now to become a fan and support your favorite artists!
Support this Artist!
Help support Matthew Moran during these difficult times by donating directly to them:
Donate via Venmo

Matthew Moran has been added as an artist you support!