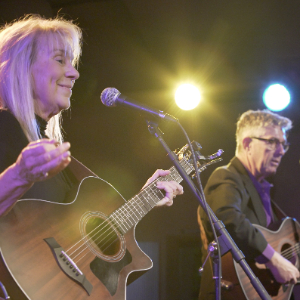 Some things just get better with age: wine, cheese and "JoAnn & Monte".

JoAnn Molloy, originally from Washington, D.C., ventured to 40 below temperatures in Fairbanks, AK in February 1974 as a "chick singer" with a band. "When I was a little girl, every winter I would say, 'When I grow up, I'm going to live in Hawaii'. But during the pipe-line boom in Alaska, they were paying bands great money...and I can be bought," Molloy jokes. Although she went kicking and screaming, she fell in love it, the people and the lifestyle and moved up the following December where she began performing as a solo artist playing guitar and singing her original songs as well as covers and telling her stories.

Monte Davis, originally from Austin, MN (the home of SPAM), went to Fairbanks playing drums in a family trio in 1971 and frequently quotes John Denver "coming home to a place I'd never been before" to express how he fell in love with The Greenland. He traveled back and forth to his home in Denver, CO and when he returned to Alaska in June 1975 with his band, his best friend said, "you gotta go hear this singer/songwriter, JoAnn."

They met, fell in love and began their personal and music relations. "We started writing songs, performing and telling our stories to our audiences immediately," adds Davis.

Fans loved their performances because they were inspirational and motivational as well as entertaining as they shared their personal experiences of life, its trials, tribulations, lessons, family and friends.

In 1979, they ventured to Seattle to record their first album. Upon returning home all excited and confident with their state of the art first album, the Music Director of the first radio station they solicited responded, "we just do not play local artists." To which Molloy responded, "would you mind listening and giving your professional opinion?" The next day, their songs were on regular rotation and he raved, "it was as good as ANY national artists".

In 1981 and 1983 respectively, they traveled to LA to record their second and third albums again receiving airplay, extensive media coverage and rave reviews throughout the state (see Credits, Quotes and Reviews).

After successfully gaining a large state-wide following, in 1984 the duo headed to Los Angeles in pursuit of a national record deal. They received a positive response from A&M Record Company, "we love your music but would not know how to market you because you are too diverse. Give us more pop songs." "Back then, there was not an Americana category," says Davis.

JoAnn & Monte had procured day jobs at The L.A. Studios where they had recorded their last two albums, so they continued to write their "diversity" of songs and took advantage of the free studio time benefit and the generosity and admiration of recording engineers and musicians. Over the course of their 4 years in The City of Angels, they recorded their 4th album.

The stage and the road kept calling so they returned to performing, successfully touring colleges; did a stint on the "Beltway Circuit" in Washington, DC'; and spent extended time in Nashville.

Realizing they were not pop enough for LA, folk enough for the East Coast, or country enough for Nashville, they returned home to Alaska to produce and perform "JoAnn & Monte's Alaska Show" a production featuring their songs, stories and humor about life in The Last Frontier for summer visitors and conventions as well as for locals.

In 1998, Davis realized he wanted a break from being a professional musician since he started at 15 years old, so they began touring as Public Speakers part-time for a major Alaska cruise/tour company. "It was a good day job," Molloy says. "At least we got to continue doing some music part-time."

In 2002, they released their 8th CD of originals, then moved to live with family in Fort Worth, TX in 2005 where they started their own travel business escorting tours to Alaska. However, in 2009 after releasing their 9th CD, Davis and Molloy returned to Alaska where they were fortunate to find work following the recession. "Although we were grateful to find day jobs, we weren't doing much music and I really missed it," JoAnn shares.

A series of family health issues and other extenuating circumstances sent them back to Fort Worth in 2012, then back to Alaska, then to Bellingham, WA where they finally decided to return to their first love as professional music entrepreneurs. "I know happiness is a state of mind but the whole lifestyle of music is something I love to do," Molloy adds.

In February 2019, they settled in Tucson, AZ where "not only does it feels like home," Monte explains, "there is an active music scene which encourages original songs. "We will always return to our family, friends and fans in Alaska but guess we've become 'Snowbird Songbirds'," jokes Monte.

Through they years, they have performed for over 500,000 from all over the world, on over 1,000 stages and reached millions more via appearances on CNN, TNN, QVC and TedX; released 12 albums, opened concerts for name acts (see CREDITS); appeared on commercials; written, produced and performed custom songs; appeared on various documentaries and videos; headlined twice at the famous Nashville Bluebird Cafe; appeared on TNN's Be A Star; were selected for WAMA compilation CD; and did a special performance at the Washington National Capitol.

JoAnn & Monte are currently booking their 2020 tour performing concerts at theaters, fairs and festivals; presenting their Alaska Show; and delivering their motivational and inspirational Keynote Speaker Concerts for conventions, meeting and groups, as well as enjoying local Tucson performances.

Their timeless performances are a rare chance to allow this clever, fun-loving couple to draw you in, make you feel like family, and take you on a joyous, humorous musical journey as they put their entire selves on display. They give a gift, holding nothing back, with insightful wisdom that makes the world a much better place. You'll laugh, maybe even shed a tear, sing and clap along, and leave with a heart full of happiness.

Special things do get better with age: wine, cheese and "JoAnn & Monte".

Become a fan!
Get notified when JoAnn and Monte plays locally and help support their career. Join the Undiscovered Music community now to become a fan and support your favorite artists!

JoAnn and Monte has been added as an artist you support!