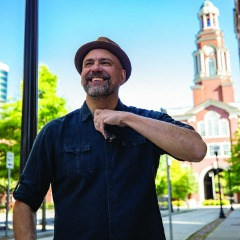 Jeff Lane is a singer/songwriter from the beautiful hills of East Tennessee where his musical roots were watered by his mother’s record collection that was packed full of greats like Bob Seger, The Eagles, Elton John, Jim Croce, Elvis, and the Commodores.

As a songwriter, Jeff Lane turns hillbilly dialect into high English literature. He sees metaphors in everyday things that are all too often take for granted. A wedding ring becomes a symbol of life’s unexpected turns: hope and happiness, dreams, despair, lessons learned, loss -and in the end, still hope. A steering wheel becomes a metaphor for the brevity of life; the role of chance and of choices; and how swiftly tragedy can strike in the midst of a laugh. Jeff’s songs are deeply connected to nature and the mountains of his native East Tennessee. The images of hills, trees, and old country barns permeate his songs. He finds the answers to the deepest philosophical questions in the quiet solitude of the countryside. His songs reflect that peace of mind and tranquility are as simple as enjoying the sunrise, working on the farm, and appreciating the small pleasures in life.

As a performer, Jeff is as much a story-teller as he is a songwriter; he is a true performing Singer-Songwriter: he understands the role of a songwriter and the role of a performer. He is a natural performer: his guitar picking is precise, whether soft and subtle or hard and heavy, always precise. He sings with an air of authority and confidence, yet with a humbleness that endears him to the audience. His command of the stage can turn a loud honky-tonk into a listening room with just a few words. And perhaps most importantly, as entertainment is about being entertained, he entertains; he lifts the listener up. And that is what good music is supposed to do: good performance of a good song is a prescription for the soul. Jeff Lane is a healer.

Become a fan!
Get notified when Jeff Lane plays locally and help support his career. Join the Undiscovered Music community now to become a fan and support your favorite artists!
Support this Artist!
Help support Jeff Lane during these difficult times by donating directly to them:
Donate via Paypal
Donate via Venmo

Jeff Lane has been added as an artist you support!