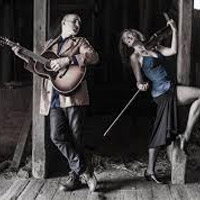 “Making beautiful music together, this duo lit up the MayFest stage. A remarkable singing voice! A match made in heaven.” - Dennis Taylor, The Monterey Herald

"What talent and charisma! My audience has never been so enthralled at any of my house concerts. They didn't want to let Dan and Laurel go. And who could blame them? I highly recommend this fantastic couple!!! - P. DeLorenzo, House Concert Host

Meeting via a chance YouTube sighting and fueled by a once-in-a-lifetime musical chemistry and friendship, Canadian-American Roots-Folk duo Dan Frechette and Laurel Thomsen are “prodigious players with songwriting that sets them apart.” Now touring in support of their recently released fourth album, "Driving By Candlelight," they combine soaring violin, diverse guitar styles, and unique vocal rapport for a dynamic, engaging, and polished performance.

Based in Northern California, Dan and Laurel’s third album, Between the Rain, was top ten on Canada’s campus radio Roots charts for 2016. They have toured North America extensively since teaming up in early 2013, performing 150 concerts per year and everything from Home Routes house concert tours of the Canadian Prairies, to headlining spots at the Listening Room Festival in Florida, the definitive Winnipeg Folk Festival, and opening up for The Wailin’ Jennys and Lawrence Juber from Wings. In 2017 they made their European debut, including concerts in Ireland, Denmark, the UK, France, and Germany.

Recognized for their musical talents as children, Dan and Laurel began performing, teaching, writing, and making their livings as musicians as teenagers.

With over 1400 songs across a impressive range of acoustic genres, Dan was signed to EMI publishing at 17 with a bursting catalogue of over 500 original songs already to his credit. Since 1992 he has gone on to release over 40 albums of original material, and has been performing high-energy, soulful concerts throughout North America and Europe. Dan’s prolific output, iconic voice, and under-the-radar career path have led many luminaries to sing his songs and share their stages. Dan has opened for the likes of Dar Williams, Richard Thompson, Ron Sexsmith, Blackie and The Rodeo Kings, and Iian Matthews of Fairport Convention. “Dan Frechette has never written a song I don’t like” says Ismaila Alfa of CBC Radio.

With a rich and expressive violin tone and an interpretive style that can both rock a solo or add backup texture and groove, Laurel has performed Classically and with a variety of bands and songwriters since she was a child and is frequently sought for her ability to add depth and emotion to diverse styles of music in the studio or on stage. Also a longtime Strings magazine contributor, Violin Geek Podcast host, the author of several multi-media programs on string playing technique, and since the age of 14, a dedicated private, Skype, and workshop lessons instructor to violin, viola, and fiddle students around the world, Laurel is passionate about not only sharing her music on stage, but helping others find their musical expression.

Over their 20+ years as full time musicians, recording artists, and music educators Dan and Laurel have gathered broad influences ranging from Folk, Classical, and Celtic, to Gospel, Vintage Country, Jazz, Rock N' Roll, Bluegrass and Blues. They flow seamlessly through genres, tempos, stories, and moods, embodying each style with virtuosic command and keeping music fans on the edge of their seats. Enjoyment is palpable.

Become a fan!
Get notified when Dan Frechette and Laurel Thomsen plays locally and help support their career. Join the Undiscovered Music community now to become a fan and support your favorite artists!

Dan Frechette and Laurel Thomsen has been added as an artist you support!