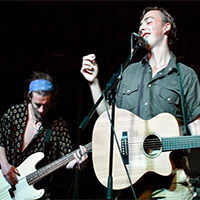 61 Rumors recently recorded with Ike Reilly (a musician/producer who has recorded with such artists as: Tom Morello, Shooter Jennings, and Cracker), and are establishing themselves regionally through touring. Addison Israelson (lead-singer) has been featured in several articles, on multiple radio stations, and in other blogs, newscasts, and various websites (attached below). Addison has had regional success frequenting independent venues all around the country most notably Acadia, Icehouse, Kathy's Pub, Freight Yard, Tap House, the Cavalier Theater, Riverfest, Gas Lamp, Red Herring Lounge, and Wildwood Saloon. Addison has an extensive original collection. His latest EP is currently being produced in Diamond City Studios just outside of Chicago. Stylistically, he is frequently recognized for his similarities to the music of Johnny Cash, Bob Dylan, The Clash, and Bruce Springsteen.

Please consider Addison Israelson and his band 61 Rumors's application for a slot this summer. The links below are for Addison's pages on Reverbnation and Facebook. You can also find his singles "Árboles", "Great Plains" and "Tabula Rasa" on Spotify, iTunes, Youtube, Amazon and Rhapsody.

3) Here is a link to Addison's feature on artist direct, KDEC FM 100.5.
https://www.youtube.com/watch?v=pWgKUHfqrJE

Upon the release of his first solo record local columnist Jeff Hansel at 507 Magazine had this to say about Addison Israelson's substance and style.

Become a fan!
Get notified when 61 Rumors play locally and help support their career. Join the Undiscovered Music community now to become a fan and support your favorite artists!

61 Rumors has been added as an artist you support!